Remember the busy White Rabbit, the mysterious Cheshire Cat, and the domineering Queen of Hearts? Children and adults alike will enjoy the dance re-creation of Lewis Carroll's two marvelous folktales; Alice's Adventures in Wonderland and Through the Looking Glass. See the iconic characters of this classic tale come to life on stage through clever choreography, comic mime, delightful music and amazing costumes.

Relive the antics of Alice, Mad Hatter, the Cheshire Cat, and more. Visit the Tea Party, the Chess Game, the Nursery Book and the Garden of Live Flowers. Watch Alice try to play her way through a game of croquet with flamingoes for mallets and some uncooperative playing cards as wickets. Winning is losing in the illogical logic of Wonderland.  With its humor and whimsy, a trip to this ballet is the perfect arts enrichment experience for any class, from Kindergarten on up!

Rescheduled to the fall 2020

The Story of Alice in Wonderland 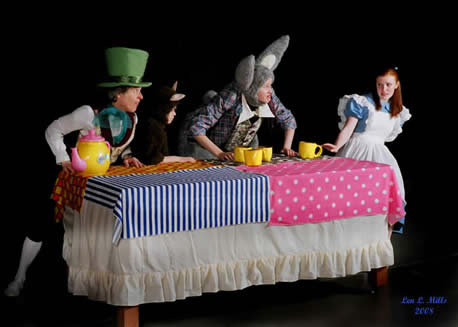 Playroom - Alice and her sister are interrupted as their parents bring gifts to occupy the girls while the adults resume their evening. Alice settles in with her new toy. It is a beautiful rabbit wearing a waistcoat and holding a pocket watch, just like father’s. Slowly she driftsoff to sleep.

Garden of Live Flowers - She awakes with a start as a huge white rabbit bumps into her and runs off. Alice dashes after the rabbit, but he disappears without a trace. She wanders into a strange garden unlike any she has ever seen. The flowers are alive! Alice meets a Weed, who is somewhat pompous, but basically kind. She, like him, is regarded by the flowers as an undesirable creature. However, not even Alice and the Weed are as bad as the Caterpillar. In a panic the flowers enlist the help of the Mad Hatter and his sleepy assistant, the Dormouse, to rid them of the pest. The Mad Hatter only makes everything worse and the flowers flee, pots and all.

Tea Party - Into the aftermath of the chaos arrives the March Hare ready for a tea party. But what a crazy tea party: lobsters as waiters, a moving table and guests hopping all over and sleeping on the table. Poor Alice is left alone as they all march off to join the Queen of Hearts’ croquet game. It is then that Alice encounters a very strange cat that seems to disappear and reappear. There is something faintly familiar about the cat, but Alice can’t quite tell what is it.

Kingdom of Cards - She wanders into the Kingdom of Cards where the Jacks and Jokers are busily painting the Queen of Hearts’ roses red. White roses were planted by mistake and the Queen has a terrible temper. Alice enjoys marching with the soldier cards and gets totally caught up in the antics of the Jacks and Jokers, much to the Queen’s displeasure. When the Mad Hatter and Dormouse arrive for the croquet game, the Queen soon forgets her unhappiness — until she notices Alice is winning. Again in a rage, she sends her henchmen out to capture Alice. 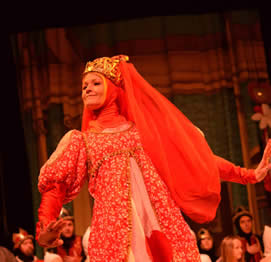 Nursery Book - While running away from the cards, Alice rests next to a tree and again encounters the Cheshire Cat. The cat shows Alice a giant book of nursery rhymes. Out of the book pop the strangest insects: elephbees, snap-dragonflies, bread-and-butterflies, and rocking-horse flies. Then come Tweedledum and Tweedledee and Humpty Dumpty. Humpty tries to show off for Alice and meets a terrible fate. Just as Alice sees Humpty off, the white rabbit zips past and Alice is in pursuit.

Land of Chess - Her chase leads her to the Land of Chess where she meets the White Knight who is very kind. She joins in a chess game and ends up being crowned Queen Alice to the cheering approval of all of the strange creatures she has met behind the looking glass. She begins to grow tired after all of her adventures and falls asleep.

Playroom - When Alice wakes up she is again in her very own playroom. Was everything real or just a dream? What do you think?

Please, please put us on your mailing list for next year.I could not believe how totally involved my students were. 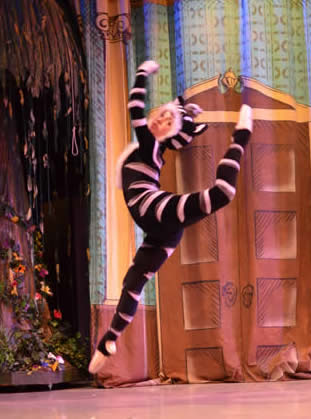 Wow!Everything was just first-rate from the teacher information to the performance.Even the macho boys enjoyed it.

The production values far surpassed my expectations.This group of performers is outstanding.The students talked about it all the way back to school.Great job!

Some of my students had never seen a ballet before.Even the boys who try to be tough and cool were fascinated.

Once the program began, my students didn't even move until the end.That says a great deal.Thanks also for the music CD to help the kids become familiar with the score.They were humming the tunes for weeks after.

The ballet was wonderful.Many of my students said it was the best field trip they had ever been on.

We felt that it was “just right” as an introduction to an art form that many of our students were unfamiliar with.

It was wonderful!A great experience for everyone!The pre-performance presentation was extremely important.It helped the kids get excited about it.

A first-class production. The choreography, the costumes and the performance were just unbelievable.

I had never seen this ballet before and found it absolutely enchanting. What fun!

I came back for a second time with more friends because it was so well done. I was so impressed with how professional even the youngest dancers were on stage.

I brought my whole family to this, even my sports enthusiast husband and everyone found it entertaining and exciting to watch.

Rescheduled to the fall 2020